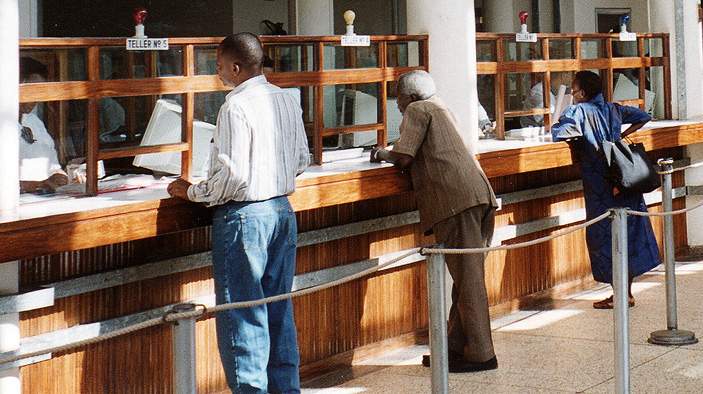 Banks are not that different from any other businesses. What sets them apart is that they work with money: looking after it, lending it, and helping people pay for things with it.

Looking after your money

Cash is very dangerous to walk around with. It’s fine to walk with small amounts of cash but it is risky to carry out huge amounts of cash. The safest place to put the money in is not a pocket, but a bank.

Some banks around the world don’t charge people to use their account e.g. safekeep their money. Basically, when people make a deposit into their bank, they are telling the bank to hold the money safe until they need it.

Because banks have many people telling them to hold their money, they can lend it to other people who need the money. A person might want a loan to get a roof for his/her house, create a business or get married.

Banks lend money. Borrowers spend the money directly into the economy, which is an healthy process to make an economy grow. By lending money, banks get paid interests, which is just another way of saying they make a profit.

Because banks are lending people’s money to others, one organization in each country has been named to make sure that all banks have sufficient financial resources (money) in case they lend to people who can’t afford to repay. In Zambia, the name of this regulator is called the Bank of Zambia.

In the future, people will rely less and less on cash. This is simply because paying for things in cash is expensive and keeps people poor.

Banks around the world have to abide by global trends and help people to adapt to new environment. So they provide debit and credit cards to help people pay for things in shops or online.

When people use a card to buy food for example, the money is transferred from their bank account to the bank account of the shop. Exactly the same thing happens when people pay for things using their debit or credit card online.

If these payments stopped working, then the entire economy would grind to a halt. This is why the Central Bank oversees these payments, to make sure they operate smoothly every day.

This article was provided by Zazu Bank

Could crypto-technologies unlock the huge potential of Africa?